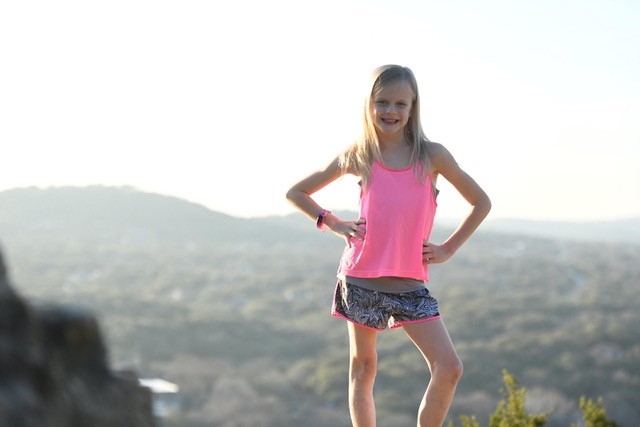 After her dad passed away, Montannah Kenney wanted to find a way to be closer to him in heaven. So, she and her mother trained to climb the tallest mountain in Africa.

When 7-year-old Montannah Kenney told her mom she wanted to climb to the peak of Mount Kilimanjaro, her wish was to be on the pinnacle of the volcano pointing toward heaven and close to her dad, who died five years ago.
Last month, Montannah, who lives in Austin, became the youngest girl ever to ascend the 19,341-foot mountain, the tallest in Africa — a feat that presents challenges to even the most avid climbers.

People who make it to the top can stay only 20 minutes because of the bitter cold and dangerously low oxygen levels at that elevation.

“I blew kisses at Dad so he knew I was there,” Montannah said, describing the moment she reached the summit.

“I don’t think she understands the magnitude of what she did,” her mom, Hollie Kenney, said last week.

The feat by the mom-and-daughter duo required months of training. The two often hiked four or five hours on the weekends along the trails near their Steiner Ranch home to prepare for the climb, which took 6½ days from base to peak and another day and a half to get down.

“It taught her how to really just stay on her toes with tired legs,” Kenney said of the preparation, “which is exactly what you want to do on the mountain.”

The journey to the top of the mountain can be perilous for a young child because of the elevation, Kenney said — a risk that had given her pause when Montannah first asked to go two years ago after Kenney’s sister backed out of the trip. But instead of rejecting Montannah’s request, Kenney sought advice from a travel nurse on how to ascend safely.

She also considered possible scenarios and chose a longer route up the mountain, so the two could ease their way into the high elevation and avoid altitude sickness. Kenney got a special permit because you have to be at least 10 years old to be allowed to climb.

They stocked up on gear: waterproof hiking boots, a pair of trekking poles and enough clothing for the warm 80-degree days and frigid minus-30-degree nights. On March 10, they set off from the base of the mountain.

“There were points I thought we wouldn’t make it,” Kenney said. “Beyond the first day, it rained every single day. Everything we owned was wet. By day five, we were putting on wet clothes to go out in the freezing weather.”

The night before they ascended to the top of the mountain, they rose at 10:45 p.m. for breakfast, departing just after midnight in the cold rain and snow. “It was so slippery that you couldn’t even gain traction,” Kenney said. “It took 7½ hours to go 3 miles.”

When they made it to the top, they couldn’t breathe or cry out. But Kenney said they felt a huge sense of accomplishment, which is clear in the photos they took.

After the journey down the mountain, they celebrated in Tanzania, visiting beaches and craters, taking a safari through the Serengeti plains and meeting the locals. The best part for Kenney: She got to spend 21 days nonstop with her daughter.

“I think that was super exciting for us,” she said. “It’s something she’ll be able to look back on and smile.”

“Our philosophy in life is to be somebody and to go out there and do something with your life,” Kenney said of the record. “This goes along with our motto, and we’ll continue this the rest of our life. We want our life to have purpose.”

Part of the goal for the Kenneys in their climb was to raise money for EMDR therapy, or eye movement desensitization and reprocessing, for treating trauma survivors. Montannah’s father had struggled for many years with post-traumatic stress and had just started the treatment when he died in 2013.

A GoFundMe account has been set up to raise $30,000, which Kenney wants to use to support research and to pay for sessions for 10 families who can’t afford it, she said. “We’d like to be able to help them so they don’t have to go through what we went through.”