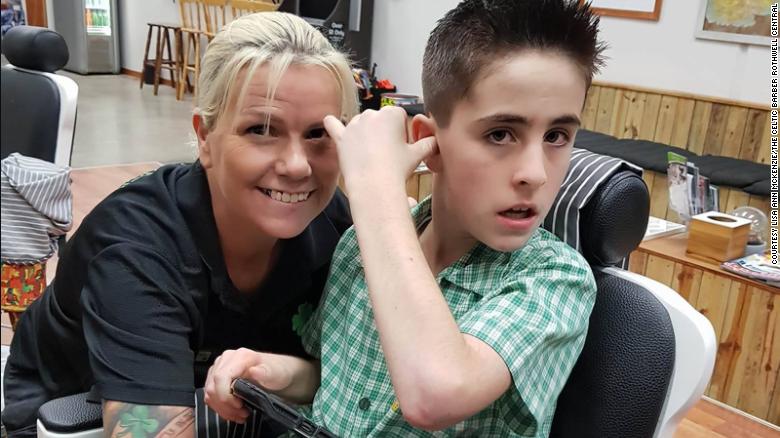 Clippers buzzing, scissors clinking, men talking loudly in the talcum-scented air. It’s a comforting barbershop cacophony for most of the clients.

But for Jordie Rowland, it’s an assault on the senses. He has autism and his cries pierced through the other noises in the Brisbane, Australia, barbershop.
“You could hear his distress before you saw him,” barber Lisa Ann McKenzie told CNN.
Then, after two hard years of trying, the flailing child who couldn’t sit through a haircut calmed down when the barber sang his favorite song — “The Wheels on the Bus.”
With that breakthrough earlier this month, McKenzie emerged with a new purpose: a day at her shop reserved just for kids with special needs.

Thrashing in the chair

Jordie Rowland, 11, has a severe form of autism. He is nonverbal and prone to sensory overload.
“At the very start, we would be lucky to get a half haircut done,” McKenzie said.
She felt helpless against a condition she didn’t understand.
“It was so disheartening. It was just pulling my heart out,” she said.
McKenzie, herself a mother of four, read up on sensory sensitivity and autism. She learned how important routine is for many people with autism and she set up a plan.
McKenzie and Jordie look forward to happier haircuts.

Every two weeks, Jordie and his parents arrived at the barbershop near closing time when things were quieter. McKenzie dimmed the lights and turned down the music.
“We weren’t sure what would work but I felt it would decrease the sensory issues,” she said.
McKenzie attempted to cut Jordie’s hair for as long as he allowed it.
“We would do a quarter,” she said. “It was four weeks before it looked like a normal haircut.”
The new routine was a slight improvement for Jordie, but not for McKenzie’s bosses. They reprimanded her for spending too much time on the boy, she said.
“They wanted us to stick with five haircuts an hour.”
They also rebuked her for not charging Jordie’s parents, she said.
“I wouldn’t charge because it wasn’t a haircut,” she said.
Haircuts were a struggle for Jordie before his barber, Lisa Ann McKenzie made a musical connection.

A new shop, a big change

Three weeks later, the persistent barber opened her very own barber shop with plans for Jordie to be one of her first clients.
She says the first time he arrived, she allowed him to walk around and explore, which made him more comfortable.
This time when Jordie approached his haircut, he was calmer.
“We got three-quarters of the way through,” McKenzie said.
One day as McKenzie attempted to cut Jordie’s hair, she sensed he was becoming anxious. Without thinking, she started singing, “The Wheels on the Bus.”
“I sing to all the kids when using the clippers so the noise of the clippers doesn’t scare them,” McKenzie said.
But she had never sang that song to Jordie.
“He looked straight at me. It’s hard to describe but I felt like my heart exploded,” she said.
Jordie allowed her to finish the haircut, complete with styling gel.
“I even got a big hug.”
That day McKenzie left her shop with a new goal: to make families like the Rowlands feel safe and understood.
“She has been a great support to us in our journey with his haircuts,” Jordie’s mother told CNN.

One Sunday a month, McKenzie offers “Sensory Sensitive Sunday Sessions” for children with special needs.
“You don’t have to force the customers to sit in the chair — it doesn’t matter,” McKenzie said.
She, and the five other barbers in her shop, are willing to cut hair on the floor or while the child is playing with toys.
She encourages barbers to make a connection with their clients before beginning the cut.
“The haircut will get better once the connection is stronger,” McKenzie said.
Some of McKenzie’s customers travel hours to experience her special touch.
The barber, who’s also known as the “child whisperer,” tries to make every one of them feel at home.
“We are a family,” she said.