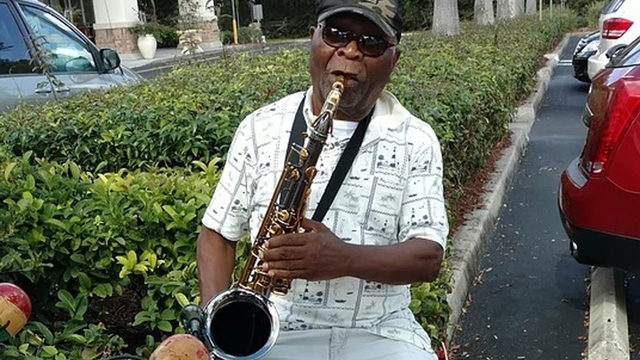 Here at Daymaker, we are obsessed with finding and sharing stories about people spreading kindness and love and making the world a better place. That’s why we wanted to share this one from Action News Jax about Oladepo Ogomodede, a musician in Riverview, Florida who spends his weekends playing music for shoppers in the Lake St. Charles Shopping Plaza.

RIVERVIEW, Fla. – A crowded parking lot at a Florida shopping center can be unexpectedly soothing — at least when shoppers are serenaded by a retired music teacher and recording artist playing smooth jazz from his tenor saxophone.

Oladepo Ogomodede, 84, has been a fixture in the Lake St. Charles Shopping Plaza in Riverview for seven years. He sets up a tent on Fridays and Saturdays and plays music with his saxophone or flute. He even sings a few songs. He made a special appearance the day before Thanksgiving, giving shoppers some holiday cheer a day early.

He bills himself as “Jamaica’s Gift to Jazz,” and has gone by the aliases of Ivanhoe Oladepo Ogomodede (or just Ivanhoe) and Mickey O’Bryan. His business card touts “Ivanhoe, One Man Band.” And he has had a love affair with music from the time he picked up a set of drumsticks as a 5-year-old attending music school in his native town of Port Antonio, Jamaica. He added the saxophone, flute and clarinet to his repertoire.

Especially jazz. His latest collection of songs on CD (he sells them for $3) are advertised as “Jazz the Way You Love It.” Some of Ogomodede’s albums can be found on eBay, and he also can be found on YouTube. He has performed songs such as “It’s Your Thing,” “Take Five,” and “Theme From Love Story,” and has sat in with musicians such as James Brown, Lionel Hampton, Miles Davis and Dizzy Gillespie.

Even though he’s in his mid-80s, Ogomodede still enjoys playing his music in public. In addition to his shopping plaza appearances, Ogomodede also performs at weddings and parties, and occasionally drops in for sessions at area night clubs.

He’s not slowing down.

“I don’t like rocking chairs,” he said. “And I love to come out (here) and exercise my brain.”

After playing in a band for the Jamaican military, Ogomodede earned a degree at Lehman College in New York City. After graduating from the Bronx school, he taught music at Public School 299 (now known as Thomas Warren Field School), in the Bushwick section of Brooklyn. He said he also covered music as a journalist for the New York Amsterdam News.

Ogomodede met his wife, Barbara, “at a club in Suffolk County,” Long Island and have been married “for more than 50 years.” One of the songs on his latest CD collection is named for her: “Barbara.”

He got his nickname of Mickey O’Bryan as a child. “People said I looked like Mickey Mouse,” he laughed.

Playing music for children is one of Ogomodede’s joys.

“Music is a language. And if you take your instrument,” he said, demonstrating by playing a few bars of “Mary Had a Little Lamb” on the sax, “now they know that song. Then you’re speaking their language.”

Ogomodede continues to communicate by playing his music — his own, and those of other artists. He takes requests at the Lake St. Charles shopping center and can be heard singing “What a Wonderful World,” by Louis Armstrong or songs from “Beauty and the Beast.”

Before picking up his saxophone again to play, Ogomodede explains his simple philosophy.

“I believe in myself, and I try to do exactly what my mind tells me to do,” he said.