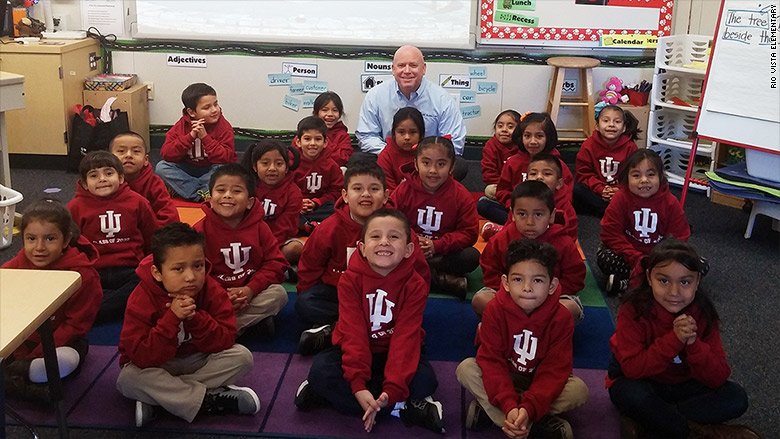 Sometimes, acts of kindness can have ripple effects that will last generations. That’s definitely the case with this story from GlobalCitizen.org of a couple who has committed to paying for college education for 26 children.

A stranger just gave the best gift possible to a group of children: An education.

Twenty-six kindergarten students in California have just had their educational futures guaranteed by a stranger.

Marty Burbank and his wife Seon are pledging to fund two years of community college and two years at a California State University or the equivalent amount for a university of each Rio Vista Elementary School student’s choice.

The 26 students are in a class together because they all speak Spanish at home and faced language barriers when they started classes in English. Their teacher, Tessa Ashton, said the students came in knowing little English and most of them had never heard of college as an option.

The Rio Vista Elementary school has been pushing awareness of college to its student in a new initiative. Each teacher chooses a university to focus on for a year, and displays the school flag and talks about it with the students often. Tessa chose her alma mater Indiana university to focus on this year. (Hence the students wearing IU sweatshirts with their expected graduation year, 2032, on them in the picture above).

Now college is not just an option but, financially, it is a guaranteed possibility. Marty and Seon were the first in their families to go to college. Marty is now a lawyer and Navy veteran and Seon is a professor at Vanguard University. They know firsthand the value of education and the opportunities it can bring.

“I thought, let’s take that financial burden away and maybe these kids will get more encouragement about going to college,” Burbank told CNN.

There is one catch to Burbank’s funding: Every year each student will have to draw a picture or write an essay about what going to college will mean for them and their families, to serve as a powerful reminder for the students and their communities.

“I’m a strong believer in visualizing your goals, and this way they’ll be thinking about this each year for the next 12 years,” Marty said.

Burbank has been a regular supporter of the school and this initiative for the past four years since first meeting and hearing about Tessa Ashton’s class at Church.

In the last few months he and his wife had been considering buying a boat but after some reflection he “thought that buying a boat at that point would be a selfish thing.”

The couple’s donation reportedly will hurt their finances a bit, but Marty has a great theory on this.

“They say give until it hurts a little, and this hurts. But we feel it’s the best investment we could make,” he said.

He knows that not everyone is able to support a full classroom of 26 kids. But he says it’s not how big the financial support is, but whether or not people are actively helping children get educated and build their futures.

The classroom’s teacher summed it up best: “Suddenly they can dream about a different future for their child, that’s pretty remarkable.”