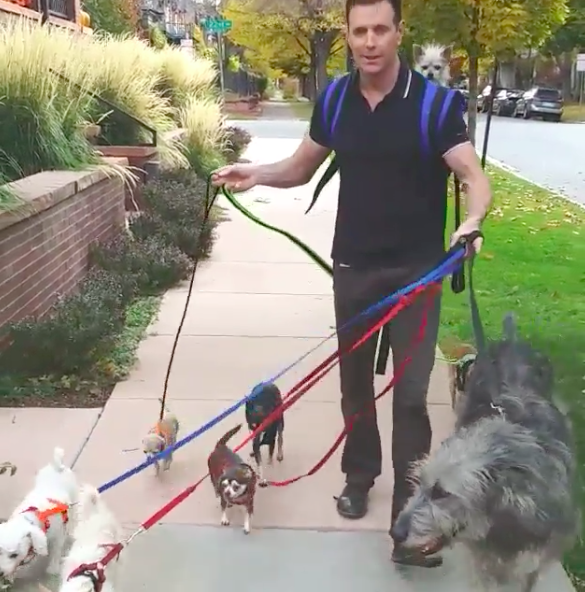 Sometimes, something beautiful can come out of sadness. HuffingtonPost tells the story of Steve Greig, a Denver accountant who, after his dog passed away, dedicated his life to taking care of senior animals. He now has eight elderly dogs, two cats, two ducks, a pig, a rabbit, and chickens (to name a few).

“I knew that this would be the beginning of the rest of my life,” he told Mashable last month. “When any pet dies, the pain can be so intense and heartbreaking that many people will try to avoid this again at all costs. But, if when a pet dies you allow another one to live in their place, it is incredibly powerful. You have both honored your fallen pet’s life and given dignity to another that probably wouldn’t have had that opportunity.”

Greig decided to pay tribute to Wolfgang by adopting a new pet from a local shelter. But he had something very specific in mind: he wanted to take home the “oldest, least adoptable” dog in the place.

That day, Greig took home Eeyore, a 12-year-old Chihuahua with bad knees and a heart murmur.

“I was so distraught, but I wanted to find a way for something great to happen, to give [Wolfgang’s] death meaning,” Greig, 50, told ABC News in a recent interview.

Since then, Greig has dedicated his life to taking care of senior animals like Eeyore. “It just took off from there,” he said. “Whenever I came across a dog that didn’t look like it was going to find a home, I took it in.”

Over the years, Greig has taken in dogs and cats, but also a bevy of farm animals.

Greig has a roommate and a housekeeper who he credits with helping him care for the animals. But even with this support, he admits that looking after such an enormous brood can take a toll.

“It can be a repetitive, exhausting cycle,” Greig, who wakes up at 5 a.m. on weekdays to prepare meals for his big family, told Mashable. “But I know how blessed I am to take care of these animals.”

“I love all dogs, but there is just something special about the bond between the owner and a shelter pet,” he said in an interview with photographer Nancy LeVine last year. “Knowing that you saved an animal from possible death has an incredible impact on both of you.”

Visit Petfinder.com or your local shelter to adopt a furry forever friend of your own.