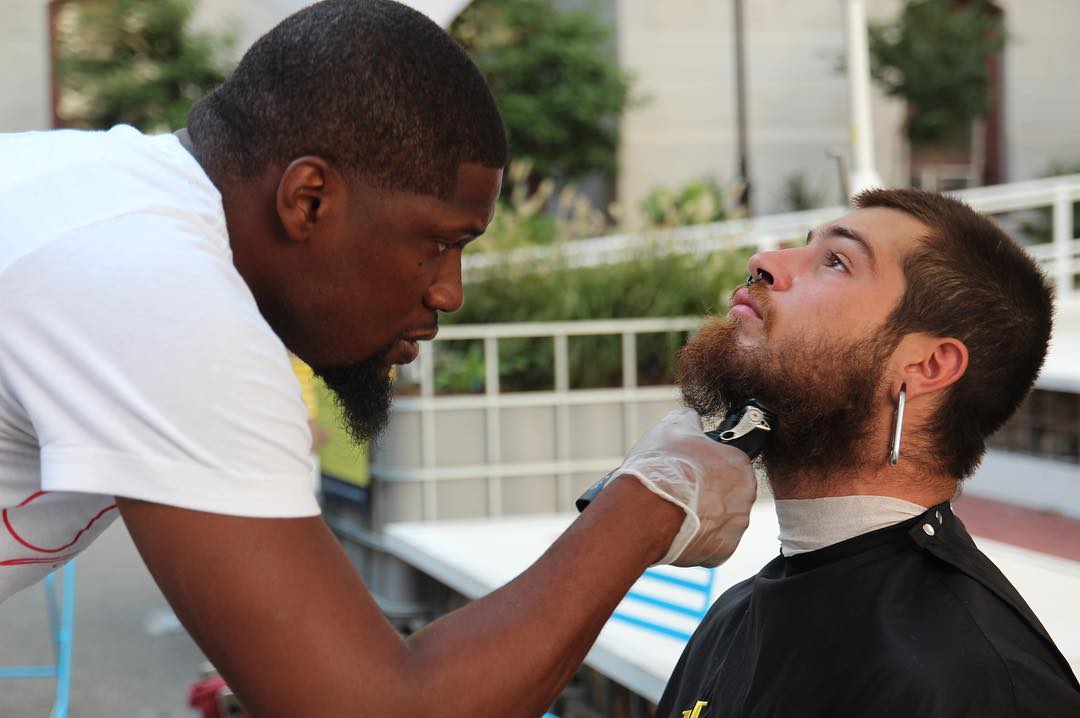 Kindness inspires kindness. Today.com reports that when a Good Samaritan heard about how Brennan Jones was giving free haircuts to homeless people on the streets of Philadelphia, he gave him his own barbershop—no strings attached.

One good deed leads to another, or so it seemed when a stranger offered Brennon Jones an offer he couldn’t refuse: his own barbershop, no strings attached.

Jones, 29, is known in the Philadelphia area for giving out free haircuts to the homeless. A former barber who was most recently working as a wardrobe stylist, he spent much of his free time this year driving around downtown with a tray table and clippers, his “personal mobile salon.”

“Wherever I would see a homeless guy sitting on a corner, holding a sign or something, I would get out and start a conversation,” Jones told TODAY Style.

Then he’d offer something most of them wouldn’t expect: a free haircut. It started earlier this year, when Jones passed by a homeless person, dropping a couple dollars and a banana in front of him. But later, the sight of the man stuck with him.

It’s just a haircut. But to them, it’s like a new beginning.

“I started to kind of beat myself up,” Jones said. “I felt as though I didn’t do enough. I missed out on the opportunity to potentially change his life, in a sense … to help out more.”

So he thought of something he could do: haircuts. He dusted off his clippers and drove around looking for people who might be interested, stopping every so often and plugging the clippers in with a power inverter that he hooked up to his car battery. He still remembers the first haircut he did, for a man on the corner of South 15th Street and Walnut Street, in downtown Philadelphia.

They expecting me to change now that the sun shinning. But I'm Still moving now like I did when I first started! #AintNothinChange #ImStillGrinding #Haircut4Homeless #SpreadLove

“I asked if there was something I could do to put a smile on his face other than give him money,” Jones said. “He said, ‘No, not really.’ And I said, ‘Well, I have an idea. What if I can offer you a haircut?'”

Jones said the man was interested, but didn’t want to leave his corner. Jones assured him he wouldn’t have to, as he had all the supplies he needed in his car. He cut the man’s hair right there on the sidewalk — the first of hundreds he would do in coming months. He called his operation “Haircuts for Homeless” and took to social media to advertise his services and post livestreams of the haircuts on Facebook, which quickly went viral.

Now the tables have turned, and a good Samaritan is helping Jones. This month, he celebrated the opening of his very own barbershop — a gift from a fellow barber who was inspired by Jones’ mission.

**Broad& Walnut They said this spot was "unsafe", "dangerous"!! Guess it's safe to say I'll risk my life for the lives of others! It's bigger than a haircut…. ?♥️ #Haircut4Homeless #RebrandingHumanity #SpreadLove

Sean Johnson, 44, is a barber and business owner in Philadelphia. He had been hanging onto an empty barbershop for nearly two years, trying to get it off the ground. (He also runs another barbershop nearby.) When he heard about what Jones was doing, it seemed like the perfect match, he told TODAY Style.

Johnson first met Jones in April, when he happened to notice him cutting hair on a street downtown.

“I was looking at his barber tools and noticing he didn’t have up-to-date equipment,” Johnson said.

Originally, Johnson tried to hire him to work at his current barbershop, but Jones politely declined. A few months later, he returned to Jones with a different offer: If he wanted, he could have his empty barbershop, and have a warm space where he could continue to cut hair for the homeless during the winter months.

Jones said he was “excited” but “confused” by the idea.

There's NO other way I'd rather spend my Labor… Blessing others!! If your looking for something to do today, COME JOIN ME!! Let's Give Back and SPREAD LOVE!!!! #HappyLaborDay #Haircut4Homeless #Chasing1000

“I never considered myself worthy of being an owner of my own establishment,” Jones said, recalling the moment he went to see the space. “He said, ‘Well, this building is sitting. Do you like it?’ And I said yes, I love it. He tossed me the keys and said, ‘Because of what you’ve done for others, this is my way of doing something for you.'”

Now Jones continues to cut hair for the homeless on Mondays — he calls them “Makeover Mondays” and also provides food and toiletries if needed — and opens the shop, Phenomenon Perfection, to paying customers Tuesday through Saturday.

Johnson said he’s not worried about any competition for his other store, Taper’s Barbershop, which is on the same street. Instead, he thinks of himself as a mentor to Jones, a younger barber who’s learning to be a business owner.

“What Brennon is doing is really excellent,” he said. “I’m down there on Mondays helping him with the homeless. And when it’s overcrowded here, we’ll send people there.”

As for Jones, he’s just happy to continue doing what he’s passionate about, helping the homeless in the best way he knows how.

“It’s just a haircut,” he said. “But to them, it’s like a new beginning in a sense. It’s like a breath of fresh air.”