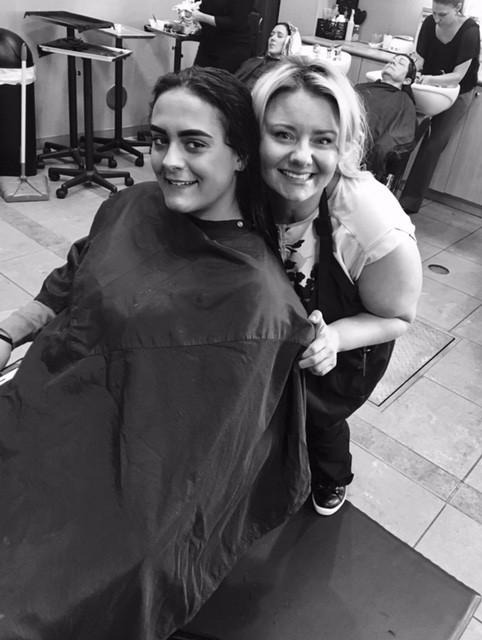 One of the best parts of daymaking is that it can be so easy. We truly believe—because we’ve experienced it firsthand—that the smallest gestures have the power to set off a ripple effect that changes the world.

Sometimes, though, daymaking can be incredibly difficult—requiring great personal sacrifice and tremendous hardship. Recently, we heard one such story that stopped us in our tracks. We couldn’t wait to share it with you.

A STYLIST WITH A MISSION

Stephanie, a stylist at Avalon Salon in Denver, CO, has always been committed to giving back. In fact, her outreach goes back almost as far as her career: she began volunteering at a battered women’s shelter through the first salon she ever worked at and never looked back.

Since then, Stephanie’s causes have grown to include a boys’ orphanage, a teen shelter, and an annual backpack drive to collect school supplies for underprivileged children and teens. She never misses a chance to make herself of service to others in whatever way she can.

For her, the decision to give back is a simple one. “It’s important to be of service to others. I don’t always have money to give, but I can cut hair—and I know what it feels like to feel at least a little bit better about yourself because your hair looks good. If I can do that for someone, I will.”

WHEN THE TABLES TURN

In December 2016, Stephanie herself was involved in a traumatic car accident that left her in a coma for six weeks. While she is currently recovering, the process has been long and arduous. She’s had to relearn skills she once took for granted—from driving a car to cutting and coloring hair.

As you can imagine, this is a challenging position for a Master Stylist to find themselves in. “It’s hard to have done something for 18 years and have it not just click back. It’s a challenge for me to get back in there,” she says. Her attitude, however, is unparalleled—and her determination to get back behind the chair has been fueled by her clients, who have stepped up to play the daymaking role Stephanie has long held in their lives. They’ve donated Uber rides and offered rides in their own cars, made financial contributions, and even doubled down on their commitment to her beloved backpack drive.

Accepting this outpouring of assistance doesn’t always come easily to Stephanie, but it’s certainly increased her commitment to giving back in whatever ways she is able.

“I’ve had to accept so much help myself,” she says, “so it’s important to me to give back in the ways that I can. People are so selfless—all of my clients, I can’t even tell you how supportive they’ve been.”

Recently, Jennifer Carlson, a Salon Development Partner who works with the team at Avalon, had the great privilege of witnessing Stephanie’s determination and generosity firsthand.

For the past four years, Jen has been mentoring a teen girl through a Denver organization called Save Our Youth. One day at the salon, Jen told Stephanie that her involvement in the program had reaffirmed the importance of Stephanie’s backpack drive: Jen knew that the teen girl she mentored had never had a backpack or school supplies until she was the recipient of one such donation. When Stephanie heard this, she didn’t simply agree. Instead, she had a question:

“Does she want to come in for a service?”

THE SERVICE OF A LIFETIME

Little did Stephanie know, Jen’s mentee had asked only a week before if Jen could help her get a haircut. “Stephanie had no idea, though,’ says Jen. “She offered out of her own goodwill and passion for giving back.”

And did she ever. As Stephanie’s guest, Jen’s mentee didn’t just receive a haircut. She also got a life-changing shampoo and her first-ever blowout—and the full set of products she would need to recreate her look, along with tips for doing so. The entire time, Stephanie wore a back brace to enable her to stand and a walking boot on her still-broken leg. She also took a bus to the salon, because she is still unable to drive.

But none of this mattered to Stephanie. She was simply happy to have the opportunity to send her guest into her first year back at a real high school with a look she loved.

Aside from being incredibly touching, this story reaffirms something important: if people like Stephanie can find the time and energy to give so selflessly, so can we. Daymaking acts can be as small as buying a coffee for someone behind you in line or as huge as a long-term commitment like the ones Stephanie and Jen have undertaken.

Regardless, though, as Jen and Stephanie can attest, giving your time to a meaningful cause is as much or even more beneficial for the giver as it is for the recipient. If you’re also in the Denver area and interested in doing so, Jen and Stephanie particularly recommend:

You can also reach out to Avalon Salon to find out how to get involved in Stephanie’s backpack drive.

When it comes to the simplicity of giving back, Stephanie says it perfectly. “You just keep doing your best, and hopefully along the way you can help someone else do their best.” It really is that simple.