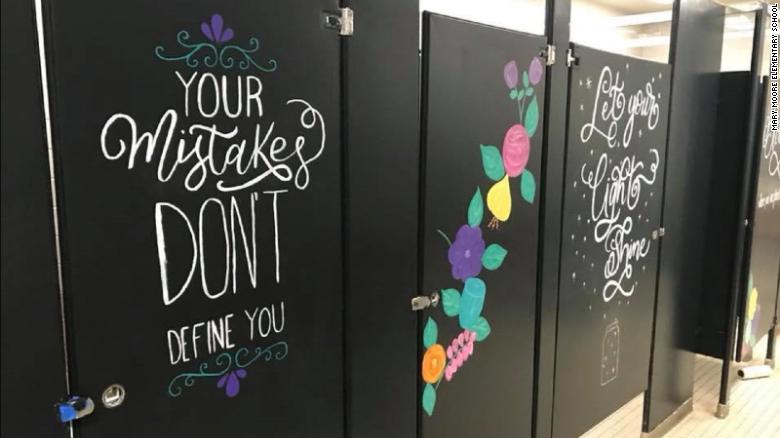 We all know that positive messages have the power to improve your day, and these parents at a Texas elementary school decided to make sure their children were surrounded by positivity at school. We love this story from Cnn.com about spreading happiness.

When an elementary school in Texas picked happiness as this year’s campus theme, a group of parents decided to bring the cheer straight to the students — and to their bathrooms.

The parents worked for 37 hours last weekend to surprise the kids at Mary Moore Elementary School in Arlington.

Motivational messages of hope, kindness and unity are now artfully splashed across the fifth grade stalls and water fountains.

“The teachers work really hard, the students really apply themselves to get good test scores, so the parents wanted to add that theme of joy [to the atmosphere],” Principal Tyson Jones told CNN.

Almost 900 students are enrolled at Mary Moore. None of the students had any idea that the transformation was underway and were shocked when they returned to school on Monday, said Jones. The school was filled with smiles all day, and the kids took pride and ownership in the powerful project.
Some of the most powerful phrases include “You will move mountains,” “You are enough,” and “She believed she could, so she did,” in the girls’ bathroom.

“It’s to remind them that they can do anything they want if they try hard enough,” Jones added.

The parents contributed their own funds and accepted donations from Home Depot, Sherwin-Williams and local businesses, JC Nails and Great Oak Dental, to complete the job.

The school is looking to spread the campus theme, which is based on the book “The Happiness Advantage” by Dr. Shawn Achor, to the rest of the bathrooms as well as the cafeteria and other common areas.

The school shared photos of the final product in a Facebook post, which has been shared more than 100,000 times. The impact of the messages has been received far and wide. A number of schools have reached out to see how they can follow in Mary Moore Elementary’s example.