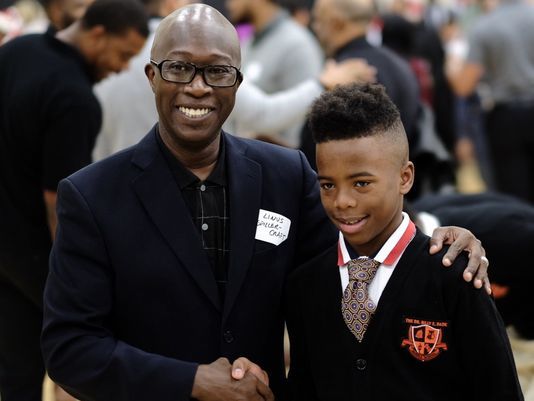 When Mr. Rogers said to “look for the helpers” in the world, he definitely meant men like this. USA Today shares a story of how a school in Dallas needed 50 male mentors for their “Breakfast with Dads” event, and 600 showed up to help.

Pastor Donald Parish Jr. didn’t have high expectations when he put out a plea on Facebook for male mentor volunteers. It was an attempt to help Billy Earl Dade Middle School in South Dallas fill seats at their first “Breakfast with Dads” event. But school administrators had concerns no one would show up.

“We know that the majority of our students were not going to have dads present,” Parish said. “Many students don’t have any males figures around, or at least the kind who would show up for a school event like this.”

Parish turned to Facebook and posted a plea to his local followers for male mentor volunteers. “We thought we would get 50 people,” Parish said.

Parish had posted his personal cell number in his Facebook post. Within days, he had 800 missed voicemails, calls, and text messages.

So many men were registering for the event, that the volunteer sign up website that conducts background checks crashed from so much traffic.

On the morning of the breakfast, 600 men from all walks of life lined up outside the school to be the male mentors that the school was hoping for.