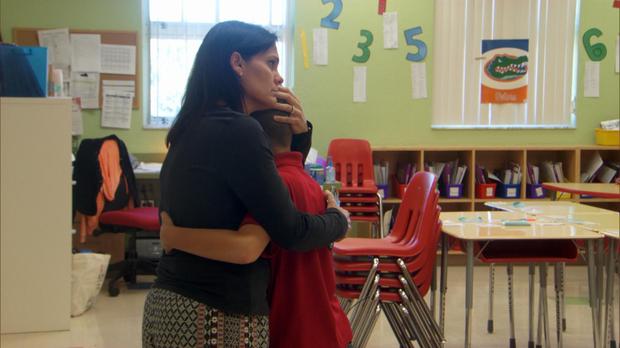 Teachers often go above-and-beyond for their students, but Donna Hoadland, a teacher at a Florida elementary school, took that to the next level. CBS news tells the story of how she realized one of her student’s mothers needed a kidney transplant, found out she was a match, and became a donor—saving her life in the process.

A good teacher will do almost anything for a student, but few have gone as far as Donna Hoagland, a teacher at Marsh Pointe Elementary in Palm Beach Gardens, Florida. It all started when Donna noticed a change in one of her 4th graders, Troy Volk.

“It did affect his morning behavior, and he was just shut down at times,” Donna said.

“She suspected there was something going on,” said Troy’s mother, Anahita. “So she asked me if anything had changed at home.”

Anahita told Donna the truth, that for the past year, she’s been in stage 5 kidney failure. She has severe pain almost daily and because she has a rare blood type, the odds of finding a donor are slim.

“When my parents told me about the kidney failing stuff, I was getting a little down,” Troy said.

He added that his worst fear was his mom “not getting a kidney ever.”

Troy has tried to keep up a brave front, and fortunately, he found a friend in Donna, who has been there for him every step of the way.

“To think what he must go through seeing his mom being sick all the time, it’s not fair,” Donna said.

But Donna felt like she could help. Turns out, she has the same rare blood type. So unbeknownst to Troy’s family, she spent months researching how to become a kidney donor, before calling up Anahita for the best parent-teacher conference of all time.

“I’m like, ‘what are you talking about?’ She turns around and she’s like, ‘we’re a match,'” Anahita said.

How could she say thank you? “You can’t,” Anahita said. “You really can’t.”

The transplant happened over Christmas break and now everyone is doing well — donor, recipient, and the boy they both cherish.

“The one thing I love about my mom’s kidney transplant … is that we all get a gift,” Troy said. “The same gift – it’s not a gift that can be wrapped in a present. It’s like a miracle. A perfect match is a miracle.”

Of course the other miracle is Donna and teachers like her – who love our children as their own. No, they don’t all give up their kidneys, but make no mistake, teachers save us parents, every day.