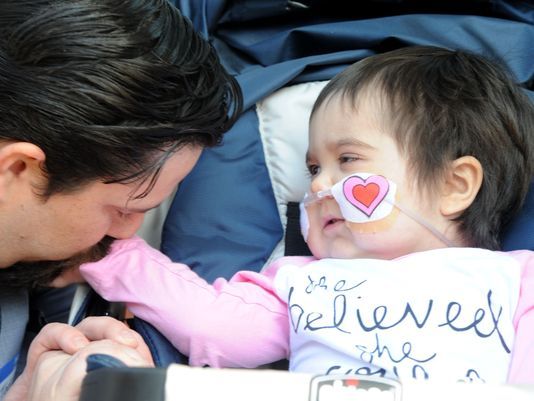 Source: Juan Carlo via The Star

Some acts of kindness aren’t so small. Some are huge and life saving—like these two dozen people who donated blood and platelets that saved the life of 2 year old Skye Savren-McCormick. This story from VC Star tells the story of the family meeting those donors.

Skye wore a shirt that said, “She believed she could so she did” and played with her father’s sunglasses. She’s in remission but breathed in oxygen through a tube because of a recent bout of pneumonia.

Talia Savren-McCormick, her mother, held the girl’s hand and wondered how to express her thoughts.

“How do you thank someone for saving your child’s life?” she said at an annual event that celebrates UCLA donors. “There are no words.”

She stood at a podium, fighting tears, and read from a script that told Skye’s story.

At the age of 4 months, pinpoint spots emerged across her body. She was always tired and couldn’t gain weight. When her blood was drawn, she couldn’t stop bleeding.

After months of misdiagnoses and a spleen that began to swell, doctors told the family she had leukemia, a rare form that strikes 1 out of 1 million children. That began the series of stem cell transplants designed to flush healthy blood cells into her tiny body.

UCLA doctors used chemotherapy to try to eradicate the disease before using the stem cells to create new blood cells. The transfusions, or what Talia Savren-McCormick called “bags of life,” helped sustain Skye when her body could no longer make its own blood cells.

“Without the blood transfusions, she would either be too weak or she would bleed to death because of the absence of platelets,” said Dr. Satiro De Oliveira, a pediatric cancer specialist at UCLA.

Tim Brennan of Thousand Oaks hung on every word of Skye’s story. He’s 39, builds smartphone apps and has a 2-year-old son. He has given blood and platelets at UCLA for six years.

It’s a way to give back, to do “something positive.”

In an audience of about 90 donors, about two dozen had been told their blood or platelets had gone directly to Skye in a revelation OK’d by the girl’s family. Brennan was one of them.

“I keep getting choked up and trying not to cry,” he said, noting his blood just goes in a bag and is taken away. He doesn’t know where it goes or who it helps.

It’s why donors pulled out their cellphones for pictures of Skye and tried to explain to Talia Savren-McCormick and her husband, Todd, how seeing Skye served as sort of an affirmation.

Daniel Cantu, a graduate student pursuing a doctorate in neuroscience, wasn’t one of Skye’s donors. But a few years ago, at this annual event put together by the UCLA Blood and Platelet Center, he met a person injured in a motorcycle accident who survived, in part, because of Cantu’s platelets.

“Going to one of these things makes you a platelet donor for life,” he said. “You see the impact.”

After the second transplant, doctors found a tumor that swelled her eye shut. She was diagnosed with a cancer that was related to the transplant, said Talia Savren-McCormick.

“We were told to take her home and make her comfortable,” she said, noting that the only hope would come in a more aggressive transplant that would be accompanied by five rounds of chemo.

Doctors told the family there was probably a 90 percent chance she wouldn’t survive.

They went for it. Doctors performed the transplant in April. The battle’s not over but Skye went from needing a transfusion every few days to not needing one in several months.

At the podium, tears welling in her eyes, Talia Savren McCormick looked at the donors.

“You helped save my daughter’s life,” she said. “Skye’s heart pumps a little part of you.”