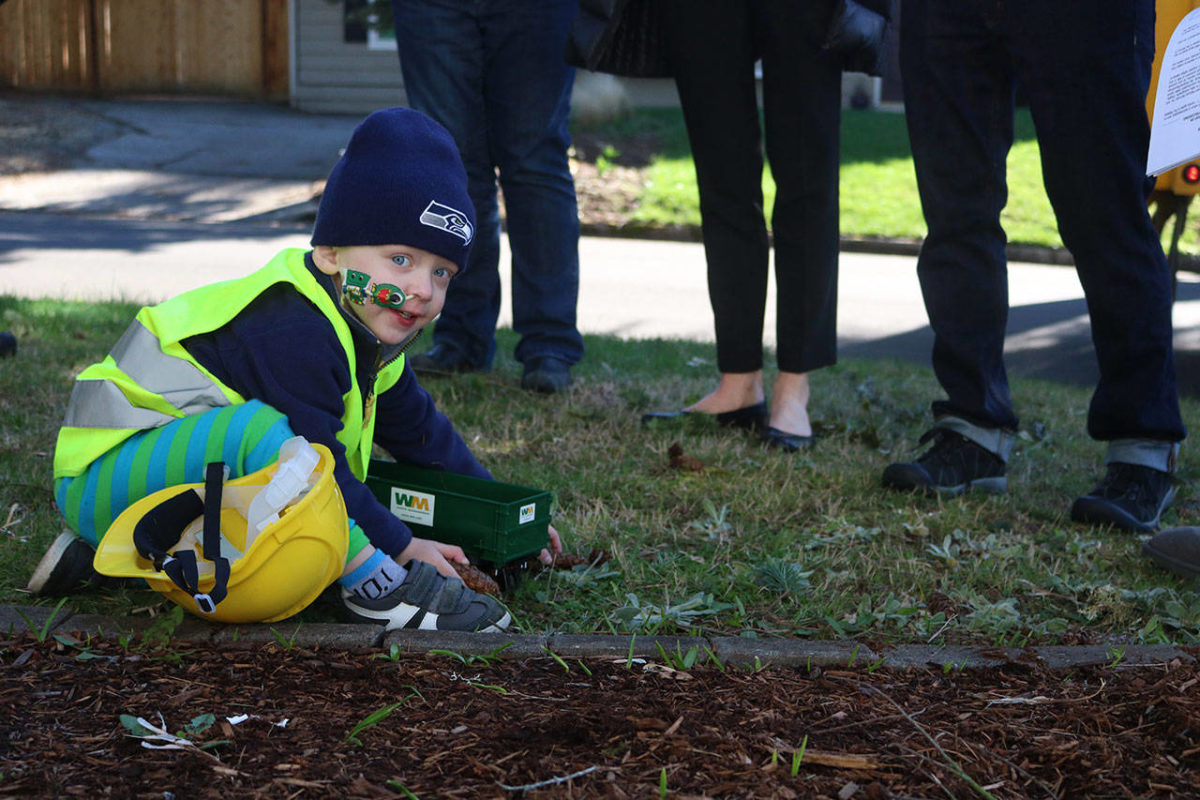 This story from KirklandReporter.com tells the story of two-year-old Lorne Muller, who is obsessed with garbage trucks. Recently, his day was made when his heroes, the garbage men, spent some time with him, showed him the trucks, and gave him his own vest and hard hat.

There’s a low hum and the whir of mechanical loaders before trash cascades into the back of a garbage truck.

Kirklanders hear the noises every week and most simply ignore it as the truck drives by, but not 2-year-old Lorne Muller. He knows the garbage truck comes every Thursday around 10 a.m. and when he hears that low hum he sprints to the window, presses his nose to the glass and watches the truck work.

“It’s the only truck that he has ever felt an obsession with,” Lorne’s mother, Jessica Muller said. “All kids like truck and stuff like that, but for some reason the garbage truck, I don’t know what it was.”

From front loaders to side loaders to back loaders, Lorne will spend hours in bed watching videos of garbage trucks as he goes through chemotherapy. Lorne was diagnosed with a Stage IV Wilms tumor in November and is undergoing treatment at Seattle Children’s Hospital.

“[He’s] mostly inpatient, which is a lot of time to be sitting in a bed, so he loves bringing a garbage truck with him,” Muller said. “It’s the only thing, the only thing that makes him happy.”

Lorne spends most of each week at the hospital, but whenever he comes home on a Thursday, he’s at the window waving at the garbage man.

“It’s his favorite day of the week,” Muller said. “Every Thursday he’s in that window watching out, trying to watch the trucks.”

The trucks came as they always did on March 15, but this time they stayed and the drivers stepped out. Muller had contacted Waste Management and asked if the drivers could stop by to show Lorne around the trucks.

Matthew Martinez and Michael Moss, the trash and recycle drivers in Lorne’s neighborhood, showed the boy how the different types of trucks worked. They even dressed Lorne in his own vest and hard hat and gave him a toy truck to play with.

Lorne was so excited he spent the final five minutes of the visit loading pine cones into his truck.

“I don’t know but he may be a garbage truck driver when he gets older,” Muller said with a laugh.

Lorne gawked at the trucks as the drivers showed off how their different trucks worked. Martinez drives a front-loading truck while Moss drives a side loader.

“It’s pretty rewarding being able to service our community,” Martinez said. “To be able to make a kid’s day like that [by] just showing up in your garbage truck makes it rewarding.”

Lorne is more than halfway finished with his treatment and is doing well, according to Muller. He’s on track to beat the cancer without any further complications.

“Children’s Hospital is an amazing place and we’re lucky to have it in our backyard,” Muller said. “There are a lot of families who show up to their door who don’t have insurance and don’t have any way to pay for something like this that totally changes their life.”

Martinez and Moss said the visit made their day. Moss high-fived Lorne before they left.

“Seeing a smile on a kid’s face puts a smile on your own face,” Moss said. “It makes you happy and proud to be in the area and to give a little kid joy just by doing what you normally do. It’s a really great feeling.”