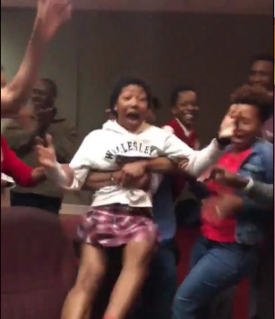 It’s impossible not to smile watching this video from Today.com of a teenager and her community celebrating the moment they found out she got accepted into Wellesley College.

Jada Wiltz asked for a little divine help getting accepted to her dream college.

Then the high school senior celebrated like crazy when she got it.

A video of a Wiltz, 18, saying a prayer and then breaking into a joyous celebration with friends, family and teachers after getting accepted to Wellesley College in Massachusetts is making people smile over the euphoria of seeing all her hard work pay off.

Wiltz, who plans on majoring in mathematics, is the latest success story from tiny T.M. Landry Prep in Breaux Bridge, Louisiana. Her celebration on March 21 has already been viewed nearly a million times.

“I don’t want what I did to be the focal point,” Wiltz told The Boston Globe. “I want it to be encouragement and just more than me. I want it to reach other people that don’t have the confidence or courage to apply to colleges like Wellesley.”

The celebration videos have become a rite of spring for students at the K-12 prep school.

Last year’s graduating class of 16 students included Ayrton Little, who had a memorable video showing his acceptance to Harvard University at only 16 years old. His older brother, Alex, was accepted to Stanford University from the same senior class.

A year earlier, it was senior Brendon Gauthier who cheered with friends and classmates after being accepted to Cornell University.

Keep up the good work!